The satisfactions part of the overall clan satisfaction are, with more coming in the future of Orcish Inn:

There are currently 5 clans in Orcish Inn. Their current state and detailed information are available in the hub book.

Opening the clan page in the hub book shows the clan interface.

The following table presents the clans of Orcish Inn. All the numbers are averages given a normal distribution (with variances being different from clan to clan). 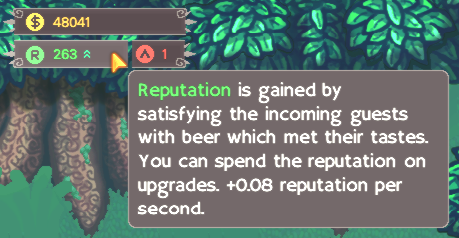 The player can access his current reputation generation by placing the mouse on the reputation interface at the top-left corner of the screen.

If the overall satisfaction exceeds a certain threshold, which is unique to every clan, the clan is satisfied. As a result, the player increases in his social rank by one. If the overall satisfaction drops below the threshold, the additional social rank gets removed. For the first time satisfying a clan, a new clan will hear from your efforts and ask for visiting your inn. If you allow them to visit your place in the hub book, they will join the other clans and will come and drink beer on a daily basis. Having another clan with likely different desires makes it overall harder to pleasure everyone, but satisfying both clans will increase the social rank further, making new parts of the game available. Having more clans gets even harder, as pub brawls can get very big and as the visitor count of previous clans increases, the player has to cope with a higher beer consumption and more bed requests.

Clans have a random count of visitors, which increases if the social rank of the player raises to new levels. A typical visit of an orcish guest looks like the following:

Visitors only come during midday and dusk. They look for a bed only during night. The count of visitors visiting the inn, the amount of beer drunk and the chance for staying a night are all influenced by the current weather. The following table shows how.

Visitor Factor is a value applied to the visitor count of the clan. As an example, if the clan has a visitor count of 4 and the current weather has a Visitor Factor of 75%, only 3 visitors will visit the inn. The amount of beer drunk is modified further by the current day time, where visitors drink 75% less beer during midday and 100% during dusk. The Stays a Night Factor is a relative factor with high values resulting in a higher chance that the visitor stays a night.

Visitors have statuses too, namely drunkenness and aggression. Their drunkenness is the main factor which increase their aggression, which probably can result in a pub brawl, but is also affects the chance that the visitor stays a night. 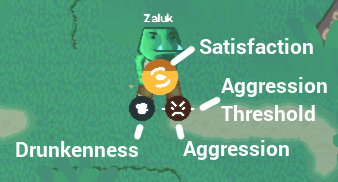 Activating the additional interface or holding the ALT key shows the visitor's state on top of them, including their current satisfaction, drunkenness and aggression. 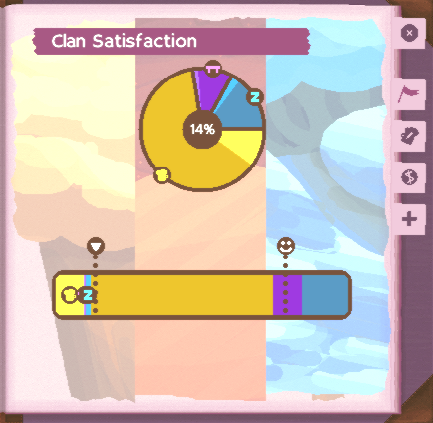 Currently, Orcish Inn consists of the following satisfaction types. More will come in the future.

The beer satisfaction is the average of the following sub satisfactions, which all relate to the beer the visitors of that clan drink:

The satisfaction is modified when a visitor finishes drinking a beer. 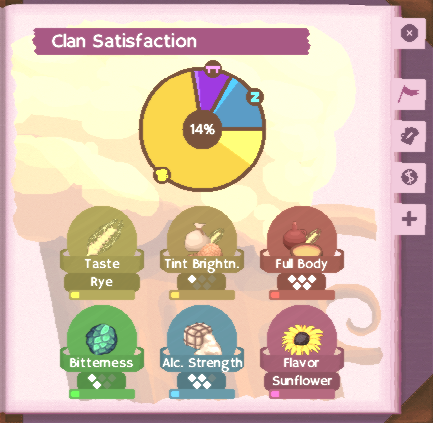 The yellow part stands for the beer satisfaction, which consists of the beer properties the clan desires. 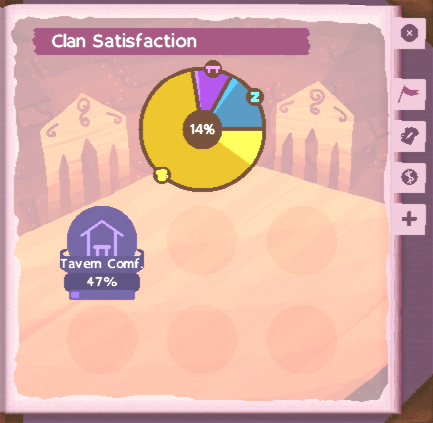 The purple part of the satisfaction relates to the comfort satisfaction. It consists of the tavern comfort of the room in which the visitors enjoy their beer.

The rest satisfaction relates to the clan's desire to stay for a comfortable night. It consists of 3 sub satisfactions:

These sub satisfaction change if a visitor rested a night in the inn. Again, more isn't automatically better. Some clans want a low bed comfort, a low dorm room comfort or want to sleep in a single room. Finding good tradeoffs is the way to go. A slight mismatch between what the clan wants and what the player provides does result in a slower increase of the corresponding sub satisfaction, up to a decrease if they mismatch too much. 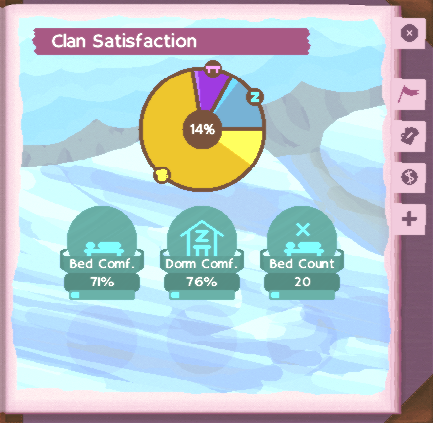 Some of the visitors may rest in your inn and the blue part of the satisfaction shows how they want to stay the night.

Orcs want to have fun, too. The clans' desire for amusement is represented with the entertainment satisfaction, which is split into the following sub satisfactions: 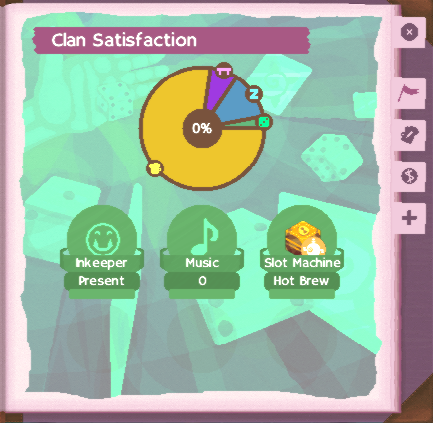 Visitors want to be entertained. Their desire can be met in different ways.
Retrieved from "https://orcishinn.gamepedia.com/index.php?title=Service&oldid=2224"
Category: